Kate Marshall Graphics, Inc. (www.CoveBear.com) is the sole producer, manufacturer and distributor of this DVD. We now offer FREE SHIPPING!

Winner of the Gold Remi Award for Nature and Wildlife Documentary, the Silver Remi Award for Ecology-Environment-Conservation Documentary, and the Bronze Remi Award for Children's Documentary at the 44th International WorldFest International Film Festival. (Although it won for children's, it is for adults too!) This is a 1 hour 38 minutes program containing many stories about black bears and also rescue. There is even one story about a bear rescuing a bear, complete with the video to prove it! (Click ARROW below to see more) 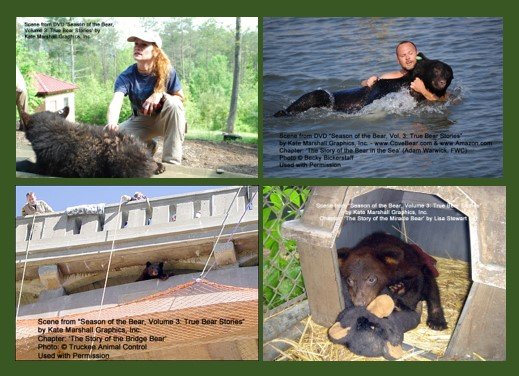